LDM spol. s r. o. was founded by three owners in the mid of 1991. From the very beginning it has always been and also for the future will be focused on production of industrial valves.

The history of production of industrial valves in Česká Třebová is dated from 1909 when Mr. Josef Jindra founded a company with the homonymic firm name. 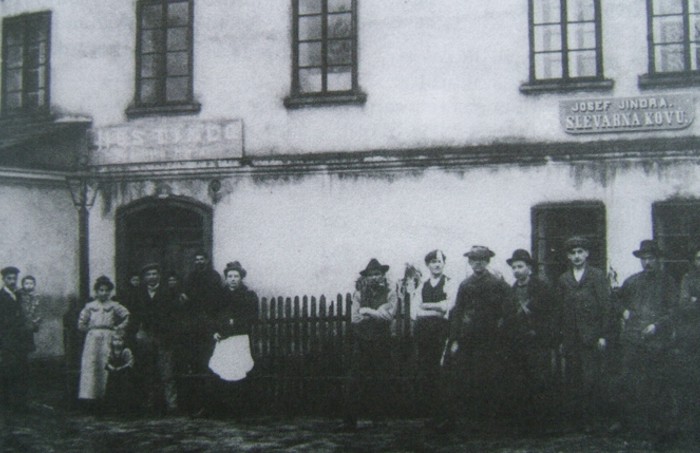 In 1919 he joined with Mr. Václav Šrefl and the company Šrefl and Jindra for production of valves for water pipes and heating industry was established. Later was registered as Jindra and Šrefl.
At first production programme at the time consisted of wide variety valves from small brass water valves over gas valves up to steam valves made of cast steel, including steam safety valves. At the end of 1929 both partners were separating and each one of them founded own factory in Česká Třebová for manufacturing of industrial valves. Nowadays the former Šrefl´s factory forms the part of production facilities of LDM.
After nationalization in 1948 the companies changed the name several times till 1975 when became a part of worldwide known Czechoslovak concern Sigma Lutín under the name Sigma Česká Třebová until 1989.

After so-called velvet revolution in 1989 the Sigma concern was split up to separated companies which were privatized or restored. The Sigma Česká Třebová was privatized and became an 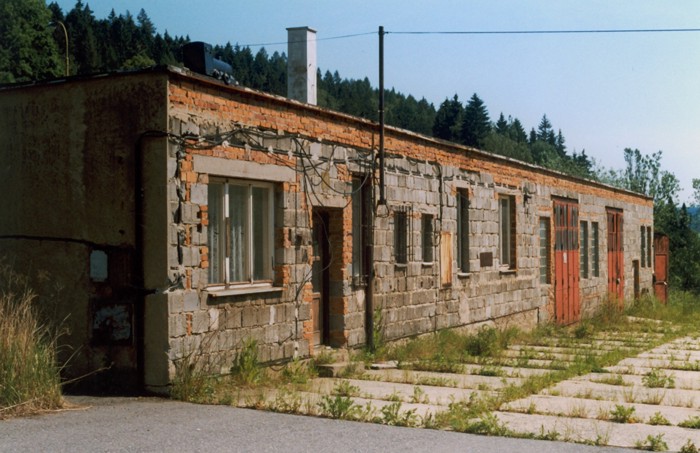 joint-stock company. Nevertheless the company was brought to bankruptcy in1995 by problematic decision of its management.
LDM bought it in 1996 and became the continuator of more than 100-years of valves manufacturing tradition in Česká Třebová.
LDM at the time of its foundation in 1991 started in let premises with main activity of buying and selling control valves SRV series from the contemporary company Sigma Česká Třebová. Parallely has been intensively worked on development of new products that should create the basis of the future production range.
In the following year – 1992, LDM for the first time introduced itself to profesional public at International trade fair in Brno and at the autumn´s Pragotherm in Prague. Here a new series of three-way, threaded valves RV 102 made of brass along with pressure-balanced valves, that arose the basic parts of SRV valves, premiered. In connection with electrohydraulic actuator, these valves were delivered as fail-safe action valves and they very soon became truly the most known product of LDM for next several years.
At the beginning of 1993, was completed PN16 line with flanged valves RV 103 made of grey cast iron. Significant step towards of the company future stability was buying its own premises, their reconstruction, changing into production lines and facilities and moving into them.
This year is marked with a completion of development and subsequent launching on the market a brand new series RV 210 – RV 215 of control valves PN 40. The valves practically at once became the top production range of the company. Up to the present day this valve line is the best-known product of the company probably and huge appreciation of their quality is that also they have been an still are manufactured under the marks of other producers (so-called OEM execution).

In 1994 was founded first subsidiary named LDM Bratislava in Slovakia. 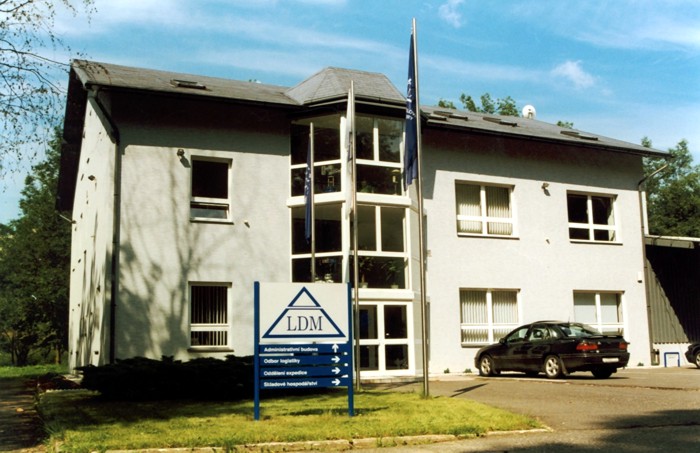 In the mid of 1995, the management of the company made decision that will be built a system of quality ensurance according to the international standard ISO 9001 and at the end of the year, LDM succeeded in buying a majority part of premises, machinery, complete range of production and know-how including a trade mark of former Sigma Česká Třebová. The range of products offered was by this step extended by high-pressure valves, reducing, feeding, starting and injection valves series from G 40 to G 92 and safety valves with additional loading series SiZ 1508.
In the following year at the Internation Trade Fair (MSV) in Brno, were displayed LDM’s own high-pressure valves with multi-step pressure reduction PN 160, injection valves PN 400 and steam-conditioning station PN 160 serving to a simultaneous pressure and temperature reduction of steam. LDM so ranks itself among the producers of one of the most demanding valves which are used in both common and nuclear power generation applications.
In 1997 LDM has more than 200 employees, the implementation of quality assurance system according to ISO 9001 is finished and in the year was also extended the family of LDM’s subsidiaries by LDM servis and representative in Poland LDM Polska. In the following year, was established a new subsidiary, this time in Bulgaria under the name LDM Bulgaria. Simultaneously were established two commercial-technical offices in Prague and Usti nad Labem.
The year 2001 saw an establishment of another subsidiary in Germany under the name LDM Armaturen and in the autumn a new line of control valves known as BEE line began to exist. In the year was also finished development of LDM´s first own electromechanical actuator ANT. First hand wheel operated shut off valves with bellows packing type UV 226 R PN 16 and 40 were launched on the market. At the end of the year LDM joined its two divisions and sold the old premises (division 01). 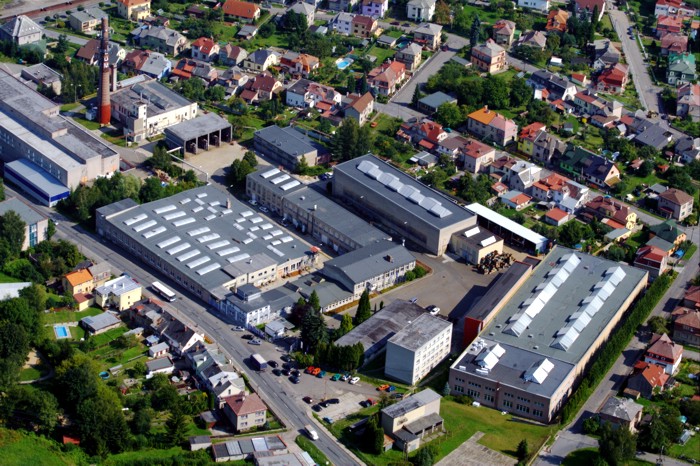 The year 2002 saw a development of high pressure valves, new series of the valve RV 805 and 806 came to exist and a development of own version of “Live Loading” packing was concluded.
In 2003 the company was sucessfully recertified according to ISO 9001 standard and a new series of high pressure valves RV 701 and 702 including steam-conditioning station RS 702 were launched on the market. Also was made a reconstrucion of the assembly hall, testing and warehousing buildings as well as investments into machinery. 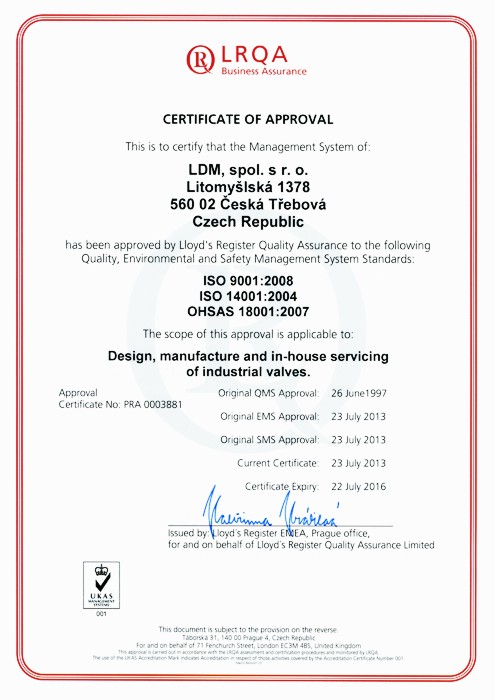 In 2004 the company continues in investments into machinery and at the same time a new series of 3-way mixing valve RV 113 as continuation of the successful line RV 103 comes on the market.
In 2005 LDM keeps on founding new subsidiaries with a new one in Russia named OAO “LDM” based in Moscow. Also was started a development and subsequently a production of high-sized valves (DN 200 to 400) at 200 line valves. The company is continuously working on development of safety valves series PV 1509.
In 2006 the investment to renovation of machinery continued and LDM sucessfully passes recertification acc. to ČSN EN ISO 9001:2001. The company also launches safety valves series PV 1509, two-way valves RV 113 R and a new electric actuator ANT 40 with the stroke 20 and 40 mm on the market.
In 2007 the investment to renovation of production facilities and technologies continues and the high-sezed valves (DN200 up to DN400) of series 200 line were launched on the market. A new subsidiary of LDM was founded in Kazakhstan under the name TOO “LDM” directed by Moscow´s subsidiary.
In 2008 an arrangements to transformation of representation of LDM in Russia from joint-stock company into the limited company were running on and LDM officially assumed the commercial representation in Kazakhstan under the name TOO “LDM”. First control cock RK 601 came to exist in LDM history with the nominal size DN 400/450 and PN 100.
In 2009 we were successfuly recertified the quality system acc .to ČSN EN ISO 9001:2009, an extension of valves series RV 113 were launched on the market in nominal diameter from DN 15 up to DN 40 which are designed for replacement of the old RV 103 series, further check valves ZV 116, 216 and 226. The transformation of subsidiary company in Russia is finished and in Moscow starts the OOO “LDM Promarmatura” company.
In 2010 the modernatization of manufacturing facilities and technologies continued and the highest size of control valve of series 200 line DN 600 was launched on the market. Also the new steam cooling unit type CHPE for steam cooling applications was launched on the market as well as the development works of new valves series 300 line were started.
In 2011 the rebuilding of company premises continued and the new valves series 300 line for PN 40 to 63 and DN 15 to 200 were launched on the market. These valves serie 300 line are available with flanged or welded connection acc. to EN standards.
In 2012 the company finished sucessfully the recertification of the quality management system ISO 9001 and it was also decided to establish next certification acc. to ISO 14001 and ISO 18001. Complete new valves line of serie RV 300, PN 63, from DN 15 till DN 200 was shown on the market. Valves of serie RV 300 are available in flanged and welded execution and they are manufactured acc. to EN as well as ANSI standards. The 3-rd generation of own actuators type ANT3 and seismic proof execution of serie RV 300 were also shown on the market.
In 2013 the recertification audit of the quality management system acc. to ČSN EN ISO 9001 and the certification of new quality management systems acc. to ČSN EN ISO 14001 (Enviromental protection management system) and ČSN OHSAS 18001 (Quality management system of health and safety at work) were conducted in LDM.
﻿